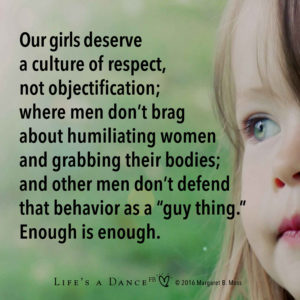 October 9, 2016 — The story broke about 36 hours ago:  Donald Trump was caught on tape saying some disgusting things about being able to grab a woman, and they’ll let him, because he’s famous. Bragging about groping a woman (and a *married* woman).

I think “narcissistic pig” is an understatement.

The only consolation in this whole sad, ludicrous mess is that it has brought the phrase “rape culture” into the open a little more. The phrase sounds “dramatic” or “over-reactive” to many men. If you’d lived inside my body, you’d know the truth. You’d know it. Viscerally. From an early age, I felt like bait. And I know many women feel the same.

As I was mulling this over, I discovered a post I made 5 years ago about Herman Cain (who was running in the 2012 campaign). What I wrote at the end makes this more surreal.

Letter posted to MSNBC on Herman Cain — Nov 11, 2011 [The story related the story of Sharon, who was then accusing candidate Cain of forcing her to perform oral sex on him.]

Having been assaulted and harassed from 16 years old and on, I have a lot of thoughts on this. I’m a 53-year-old mother of 3; a professional who has worked in a lot of places with a lot of different kinds of people (and men).

Some men just don’t seem to understand the line between appropriateness, inappropriateness, piggishness, and I-deserve-this-and-you’re-gonna-give-it-to-me.  Different men “forget themselves” for different reasons, but that’s another story.

I will tell you, first hand, that *ANY* incident like this is incredibly upsetting from a woman’s point of view. It shakes you up. You question yourself; you feel violated.  If you decide to do anything about it, you know you’re in for a worse time. Chances are that you will not get a sympathetic hearing; people will maybe think you are lying, or making the story up because of some ulterior motive. And then there are the other consequences — your job, your relationships with others at work.  If a woman does anything but bite her lip, there are negative consequences.  Even in a relatively minor incident, where a married coworker asked me out for a drink (I am also married), even though I immediately said no, it became difficult. Normal work relationships change. I tried to keep a polite distance and act casual. I’ll never say a word to anyone—except my husband [now ex] who told me, again, that I am too trusting and I was probably inviting such attention. I should never think I can be “friends”  with a man of a certain age.

I don’t know of *ANY* woman that has not been harassed in some way, running the spectrum from offensive comments to assault.

And most women also cope with it by keeping silent. You risk your job and ostracism if you speak up.

So, these four women — what could they possibly gain by thrusting themselves into media glare and public scrutiny?  Heartache. And maybe some vindication. Maybe payback, exposing Mr. Cain for the creepy man that he is.

My take is that Sharon felt encouraged to finally speak about this awful experience because of the others’ speaking up.  Why talk about such a sordid thing in public, if only to show that this man who is running for President not only doesn’t understand a woman’s right to simple respect, but he’s a liar as well.

Let’s all review the history of similar womanizers. One woman comes out with her story; others come out too. The man in question blusters, “preposterous lies… a lynching… a [file in the blank] plot to destroy me… they’re getting paid to say these things”  But finally, sadly, he has to admit his mistakes.  The examples are legion.

In this case, there are many corroborating people & facts. Two women (at least) were given out of court settlements.  *No organization* would do that unless there’s truth in it.

And as for Mrs. Cain — and Mr. Cain’s protestations that his wife of 45 years can’t imagine Mr. Cain doing anything “silly” like that described — I would bet my the farm that Mrs. Cain wants most to get through this mess with a shred of dignity left.

Mrs. Cain may know better than anyone what kind of man he really is. If she does *not*, she has plenty of company.  I personally know a handful of married men who have made inappropriate comments/advances; I am sorry for their wives.

[And by the way, the experience Sharon described would never be called “silly,” or trivialized by a serious man. As soon as I heard that, for me, it was the nail in his coffin. And not remembering? I don’t doubt that he has forgotten. But Sharon never will.]

I fervently pray that our society will move toward more civility in general, but particularly toward mutual respect around sexual appropriateness.  It’s so sad and discouraging to see the same disgusting dramas played out again and again and again.

And here we are, 5 years later, and our national conversation is again reduced to grabbing pussy.